Washburn was good, but Pettitte was better (or perhaps it was just that Seattle's lineup is so poor). The Yanks had one of their best games in years against Washburn, tagging him for four runs in seven innings. Pettitte was stellar: 7 ip, 2 er. What helped immensely were two base-running blunders: Franklin Gutierrez tried to steal second by walking there on a 2-2 pitch, and Wladimir Balentien was picked off first (Pettitte's specialty).

Melky hadn't reached base in 14 PA against Washburn, so of course he homered tonight. The Yanks scored all four runs on longballs: Damon, Melky and A-Rod (following a Tex single).

Yankee batters grounded into three double-plays (two in the first two innings), and went 0-2 with RISP, but scratched across enough runs for the win. 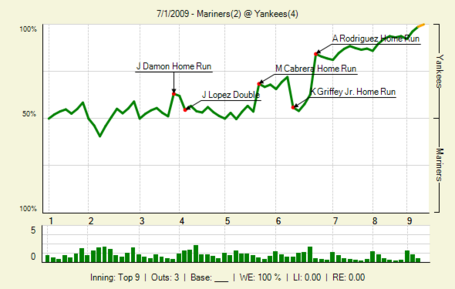