The Yankees scored five runs tonight, all on homeruns. Three were solo shorts and one was a Nick Swisher two-run blast. The other round-trippers came from (in order) Teixeira, Damon and Jeter.

Pettitte was actually better than his numbers would indicate. He had one bad inning (in part due to an A-Rod error), where he came within inches of striking out Gabe Kapler, only to see him homer on the very next pitch. He struck out a season-high seven, and lowered his ERA to 4.22.

We finally saw Phil Hughes pitch in relief, and he was great, pitching a perfect seventh inning; his fastball was consistently 94-95 MPH. It was surprising he only went one, so perhaps Girardi wants to use him again tomorrow.

Phil Coke stranded the tying run on second in the eighth, and Mo pitched a perfect ninth. It was a nice, easy recipe for a win - and it lasted just two hours and 34 minutes. 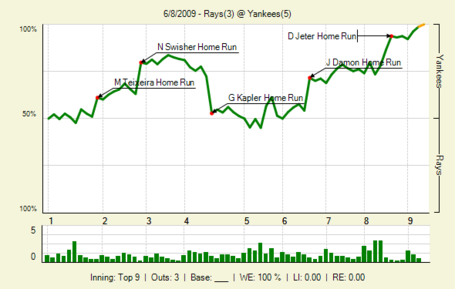