What can we take away?

Share All sharing options for: What can we take away?

First off, it was a great win - the Yanks 19th comeback victory, thanks mostly to a Melky Cabrera 8th inning homer and a Mark Teixeira three-run double.

But once we get beyond the warm and fuzzy feelings, how do we look at Wang's start today? Should we come away feeling good? Should we feel worse? You know you've had a bad season when five runs in 4.2 innings lowers your ERA. His velocity was good and his slider was decent, and he looked very good through two, but fell apart in the fifth.

To the 'Wang supporters': this is not meant to start another argument, merely a question I'm intrigued by: how many starts do you allow from him like today's before you remove him from the rotation?

Now back to our regularly scheduled game recap -

What was C.J. Wilson thinking, throwing an offspeed pitch to Melky Cabrera?! He's got a blazing fastball, why throw a lesser pitch? (Of course, we could ask the same thing of Mark Wohlers.)

If you use Brett Gardner to pinch-run, then let him run. He should have been stealing - he didn't and Tex grounded into a double-play. It also cost us Nick Swisher's bat for the rest of the game (who, by the way, is now clearly beginning another hot streak - he's going to be one of those players).

I know people will defend Robbie Cano, and I know that just because it looks like a guy isn't trying doesn't mean he's not, but here goes... he should have caught the ball in which Cervelli threw into centerfield. He kind of non-chalanted it, assuming he'd be able to catch it and tag the runner in one motion. He didn't and the runner went to third (fortunately he did not score). 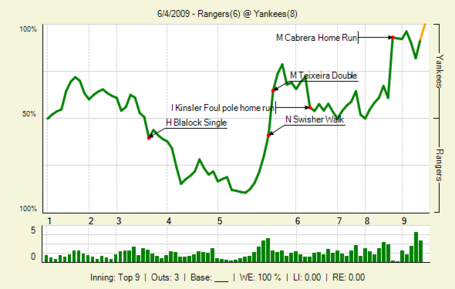