A lot happened in this 8-5 win. Shall we start at the beginning?

1. Joba wasn't good, no question about it. Nine hits and three walks in 5.1 innings is a poor start. He was lucky to only allow three runs.

2. Morrow was just as bad: five hits and five walks in 4.2 innings (though just one earned run).

3. Outside of Franklin Gutierrez, who's as good as advertised in centerfield, Seattle's defense is very bad. Russell Branyan is a gargoyle at first and Chris Woodward nearly committed three errors in one inning.

5. Who says he's not clutch? He destroyed a pitch in the seventh inning to break a three-all tie. It was one of the longest homers in the short history of the new Stadium. What shouldn't be forgotten are a few nice defensive plays he made, specifically a DP he turned in the second.

7. Great outing by Phil Coke. He only faced Ichiro and Branyan, but retired both with the go-ahead run on second.

8. What an awful eighth inning for Brian Bruney. You cannot allow consecutive hits on 0-2 counts. Bury a slider, go up the ladder with a fastball, anything other than a pitch in/near the strike zone.

9. Mo Rivera probably became the first player in history to throw out the ceremonial first pitch and the actual last pitch. It was save #501. 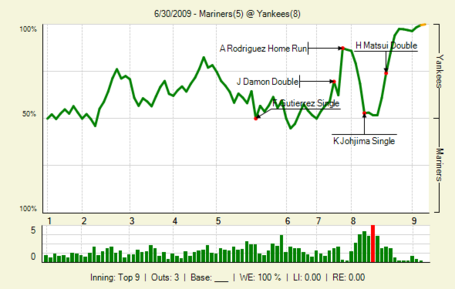 PS: Be sure to check out the Baltimore-Boston WPA graph. Wild stuff.

PPS: Jesus Montero gunned down a basestealer... oh, and popped two out of the park (to go along with a walk).