It was looking like another sad game, especially after Jeff Francoeur's homer, but the offense exploded (relatively speaking) in the sixth after Atlanta pitchers had set down the first 15 Yankees in order.

Joba should get credit for a win on multiple fronts: Not only did he pitch well (6.1 ip, 2 er, 0 bb), but he was also responsible for (literally) knocking Kenshin Kawakami from the game. I don't like to win a game that way, but at this point, any win is a step forward.

The offensive 'explosion' began after Joe Girardi got tossed for arguing Brett Gardner's pickoff (he was safe, btw). Maybe it fired the team up, maybe it didn't, but Frankie Cervelli followed with a game-tying homer (the first of his career), followed soon after by a big two-out, two-run single from the starting-to-hit A-Rod (I say that because his last few ABs, going back to last night, have seen quality swings from him).

Nick Swisher hit an opposite field solo shot the next inning. I know some fans want to see Xavier Nady playing RF when he returns, but he shouldn't. Swisher has the third best OPS+ on the team and is a far better defender than Nady. Sure, Nady should get playing time when Swish is slumping or tired, but the Mohawk-ed Man should still get the majority of PT.

How good did Rivera look going 1.1 innings? He struck out all four batters. It seems that more rest does him well.

Going back to Gardner's pickoff - it was a BS call; I trust a great baserunner like him to know exactly how far he can take a lead. He was at the very edge of his lead, knowing he could just barely make it back; unfortunately the umpire blew the call, and that 'pickoff' will be forever on his resume. 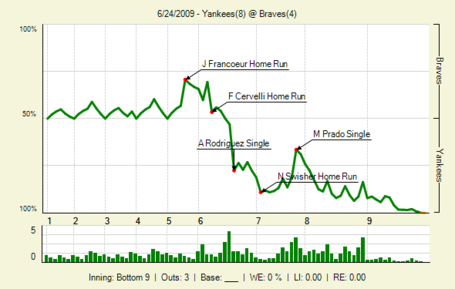 If we win one tomorrow, it's called a "winning streak."