I posted a chat with Trenton Thunder beat reporter Mike Ashmore on Friday. Today, I give you another look at the Yankee farm system, thanks to Chad Jennings, who covers AAA Scranton-Wilkes Barre for the Times-Tribune.

Jennings does a terrific job covering SWB, and writes the informative Scranton-Wilkes Barre Yankees Blog. Here is the result of our e-mail exchange.

Pinstripe Alley: Mark Melancon. We heard so much about him, then he came to New York and disappointed in a brief stay. How is he throwing? Will he see him again this year? Do the Yanks still see him as a future star?

Jennings: I think Melancon disappointed only because the expectation was so incredibly high. His first two big laegue outings were plenty impressive, it was really that last appearance -- the three walks -- that made him look sloppy. When Melancon is at his best, he's aggressive in the zone, pounding the lower half with his fastball and throwing his curveball and changeup for strikes. That's generally the guy we've see down here. It's been two weeks since he walked a batter and he's been especially good in big situations, when he's brought into the game with runners on base. I don't think those first four or five big league games changed the organization's long-term opinion of him.

Pinstripe Alley: Austin Jackson. He is having a great year. Any chance he makes an impact in New York this year, and what kind of player do you think he will be long-term? Is his lack of power a source of concern?

Jennings: I don't think Jackson will be in New York this year, unless it's in September. He's still very young for this level, and his strikeout total is still awfully high. That said, he's been better than I expected. He only has the one home run, but he's still hitting with power and driving the ball the other way. He's been terrific on the bases and in the outfield, and he's been consistent at the plate, rather than building numbers through hot streaks here and there. I admit that I was kind of skeptical -- I kind of bought into the idea that he was simply a gifted athlete trying to play baseball -- but he's changed my opinion entirely. The guy can play, I just don't think there's any need to rush him to New York.

Pinstripe Alley: Give me a guy we might not know much about who could end up being a useful big-league player?

Jennings: Does Kevin Russo count? He started to build some buzz with that strong showing in the Arizona Fall League last year, and he's continued to impress here in Triple-A. He's a nice defensive player and seems to always have a good approach at the plate. He needs to stay healthy, obviously, but at the very least he could be a utility player at the big league level. I still think Chris Stewart could be a valuable catcher at the major league level, and I think Anthony Claggett could do well if he's given another shot. Oh, and there's this guy named Shelley Duncan.

Pinstripe Alley: The Yankee draft philosophy, which they followed again this year, seems to be to take high-risk, high-reward guys other teams shy away from for whatever reason. Do you like this philosophy, and how would you assess the state of the farm system?

Jennings: These are the Yankees we're talking about. They aren't exactly an organization of role players, and their draft philosophy fits that mold. They tend to go for the home run rather than take the safe pick who seems to be, at the very least, a future utility man or middle reliever. It's hard to blame them for such an approach, especially considering they're picking late in the first round every year.

As for the current state of the system, I think it's solid. Considering the team has never had one of those mid-season fire sales that bring in top-flight talent, the system is fairly deep. It's true that there aren't many obvious impact bats, but how many organizations have more than two or three huge hitting prospects? 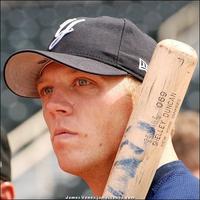 Pinstripe Alley: Shelly Duncan is crushing AAA pitching. He turns 30 this fall, will he ever be more than a AAA slugger?

Jennings: I think Shelley is more than a AAA slugger right now. I honestly believe that he could have an impact with any organization in major league baseball. I don't want to suggest he's a big league all-star, but I would love to see what he could do with semi-regular at-bats. The one time New York let him play regularly -- when he first went up in 2007 -- he was a beast. Since then, when he's had a stretch of more than an at-bat or two a week, he's done well. It's a matter of giving him a legitimate chance.
Pinstripe Alley: Do you hear anything about Ian Kennedy and whether or not he will pitch again this season?
Jennings: Still too early to say. I believe Kennedy is only five weeks removed from surgery, and he wasn't expected to start throwing until six weeks at the earliest.
Pinstripe Alley: How have Edwar Ramirez and Jonathan Albaladejo handled their demotions?
Jennings: Both seem to have handled it really well. I know Edwar a little better than Albaladejo -- Ramirez has spent a lot more time here the past three years -- and Edwar seems to be terrific spirits. He gets that he has to work on some things while he's here, and he knows that he's not a forgotten man. If he continues to pitch well, odds are he'll get another shot in New York. Same with Albaladejo. That guy languished in the Pirates organization for years, never getting above Double-A. Now he's with an organization that clearly likes him and wants to give him a shot in the big leagues.
-- Thanks to Chad for spending the time to answer our questions. If you want to know about the Yankee farm system, be sure to follow his work. Ashmore's, too.