49 picks, how many major leaguers?

Share All sharing options for: 49 picks, how many major leaguers?

That's always the question. Only a small percentage of draftees will ever make the Bigs, and an even smaller percentage will be good, everyday players. For example, the Yankees draft of 10 years ago (50 players) produced four major leaguers, and only one who could come close to being called a regular (Andy Phillips).

The Yankees selected 49 players overall in the 2009 amateur draft. Here's the breakdown:

It began with (6'1", 196 lb.) Texas prep-star Zach 'Slade' Heathcott, a toolsy, left-handed centerfielder that Frank Marcos (MLB Scouting Bureau's director) described as "kind of a Josh Hamilton look, a little smaller guy... there aren't a lot of guys with better tools than this." Heathcott has verbally committed to LSU, so the negotiations may not go quite as smoothly as the Yankees hope, but should ultimately get done. This year, he hit .457 in 46 at-bats with four homers and eight doubles. 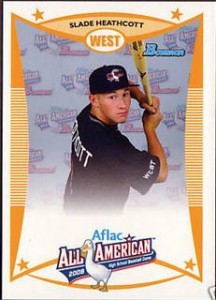 The reason he fell to #29 is two-fold: He had ACL surgery in the fall and has had a tough upbringing. The surgery apparently sapped some of his speed, but the fact that he still showed above-average speed is a good sign that when he does fully heal, he'll have great speed. The off-the-field problems consist of (formerly being a Red Sox fan, and) both his parents having drug problems. Who's to say if that will have an effect?

I’ve been told that I remind people of Russell Martin, but I model my game after Pudge (Rodriguez). His intensity. His leadership. He hits and likes to go the other way with pitches. He’s not a huge guy. He knows how to work with pitchers. He’s respected. 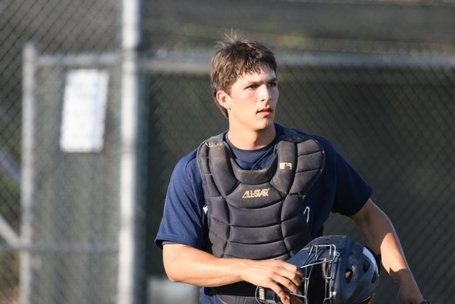 - A full rundown (with short scouting reports) of the day two picks.

Shaeffer Hall, a lefty pitcher from Kansas (25th round). It's already the third time he's been drafted, and since he still has a year of eligibility left, he may not sign.

Adam Bailey: 31st round out of Nebraska, decided to return to college already.

Pat White, the quarterback from West Virginia, was taken in the 48th round. He's a longshot to sign. He hasn't played baseball at all in college.