Melky Cabrera came through with another big hit (in a nearly identical fashion as yesterday), yet Brett Tomko allowed a run in the 11th, and the Yanks could not mount another comeback.

Tomko had two outs and no one on in the 11th, but let the Phils rally for a run.

This was a game of missed chances. In the second, Hideki Matsui struck out on ball four with Melky running - it went from runners on first and second with one out to an inning-ending DP. With two outs in the third, Sabathia let Philly rally for two, helped by Brett Gardner's misplay of a line drive. Johnny Damon was gunned down at home later that inning. Gardner was caught stealing (for only the second time) in the seventh, representing the tying run. In the ninth, Melky stood on second after a stolen base, but Nick Swisher nor Brett Gardner could drive him in for the win. Mark Teixeira grounded into a DP with two runners on in the 10th.

It just wasn't our day. 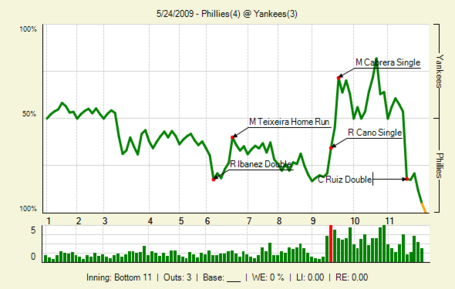 PS: Sorry for the lateness of the recap.