My wife and I vacationed in Japan recently, and were lucky enough to attend a baseball game (thanks to our Japanese friend) between the Tokyo Giants and Chunichi Dragons.

It rained all day, but since it was played in the Tokyo Dome, it didn't bother anyone. A rain-out would have destroyed our chances of going, as it was our last night there. The Yankees could take a lesson.

First off, Japanese people are so nice and polite. The taxis have bright, ultra-clean white drapes across the seats (which I managed to spill coffee on), the drivers wear gloves, and they don't accept tips. Everyone in Japan takes pride in their jobs, be it a person who merely wraps donuts at Krispy Kreme or a vendor at a baseball game. The vendors: what's interesting is that they're all young women - roughly in their early 20s (if not younger). They run up and down the stairs carrying giant packs of beer, soda, ice cream or snacks for the entirety of the game, and have a smile on their face the whole time! It was unbelievable.

The fans are just as passionate as you hear about. The Giants have their own version of Bleacher Creatures, but instead of calling out players names, they sing a song for them - each player has his own song, and they sing it every time he comes to bat. The songs are simple enough that I caught on and joined in the second time through the lineup. Another benefit of this (besides being a lot of fun) is that it eliminates the need for incessant public address 'forced chants' that you hear throughout American sporting events. I've mentioned this before (re: the Scottish soccer game I attended), and I don't want to beat a dead horse, but it's just such a simple aspect of enjoying a game that I can't understand why we screw it up in this country. 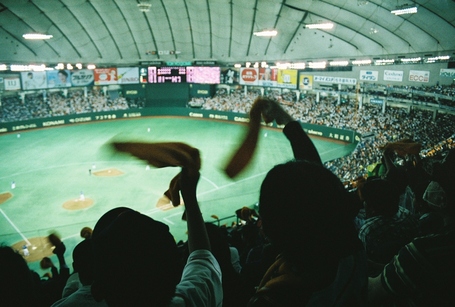 When we walked in, Tom Hanks was throwing out the first pitch. That struck us as a non-sequitur, but it turned out he was in town promoting 'Angels & Demons' with Ron Howard. They later showed up on the jumbo-tron; Hanks pointed to a card of the Giants' best player (Hayato Sakamoto), and made a 'number one' signal with his hand, eliciting wild applause from the crowd. 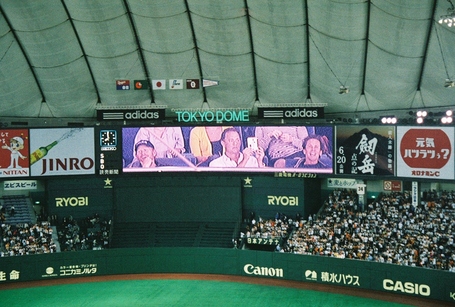 Cheerleaders after the jump...

Perhaps the most surreal aspect was the presence of cheerleaders. They came out between most half-innings and 'entertained' the crowd. Never have I seen that at a baseball game. With the young, female vendors and the cheerleaders, it's clear who the main consumers of baseball are. How would you feel about cheerleaders at a Yankee game? 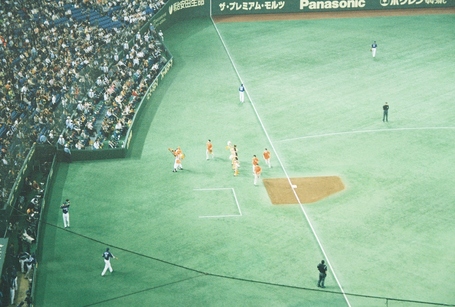 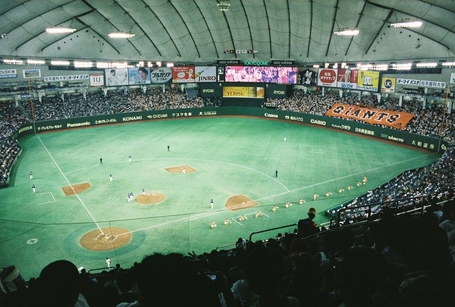 After Tokyo had handily won the game 10-4, behind American pitcher Seth Greisinger, the two 'stars' of the game came back onto the field - NHL style - and conducted interviews that were broadcast over the PA system, and then proceeded to drive around the edge of the field on golf-carts, giving high-fives to fans who reached out to them. Could you imagine Derek Jeter doing that after a game, or A-Rod? 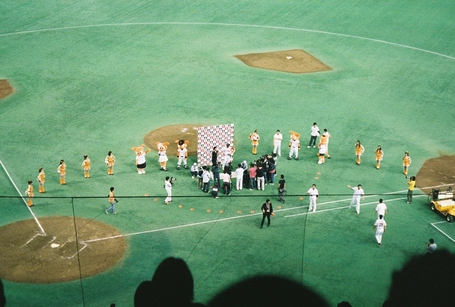 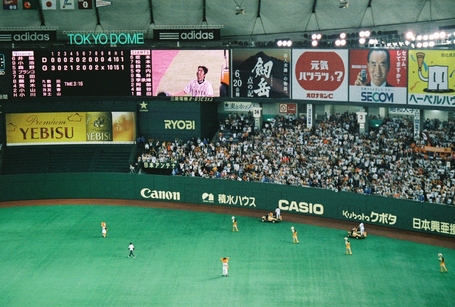 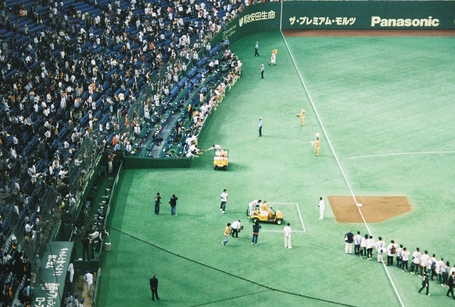 The first batter of the game walked, and the #2 hitter immediately tried to lay down a sac-bunt (he eventually walked too). That's something you'd never see in MLB. Giving away an out that early in a tie game with your best hitters due up is a waste.

A few days before the game, we happened upon what looked like a local, non-pro team practicing (perhaps an industrial team). This baseball field popped up right in the middle of an ancient park. They were hitting pop-ups and grounders to each other, yelling 'hitto' each time. Despite being amateurs, they looked extremely sound fundamentally. 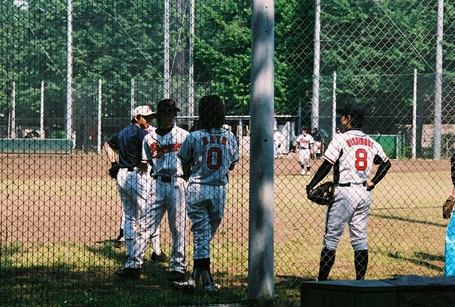 The Giants game was a great experience, and if you ever have a chance to watch NPB (Nippon Professional Baseball), take it. It's a unique way to see something extremely familiar in a whole new light.

- Speaking of international baseball, MLB Network is running a great documentary on the origin of baseball. In short, the Abner Doulbeday version is a myth, and some version of baseball (or base ball) has existed since at least the mid-18th century, originating in the south of England.