In the second inning, Swisher, Cano and Melky completed that feat (for the first time since 2005). It sparked the Yankees to another win - in almost the exact same way as last night: a close game for most of the match, until the Yanks broke it open with a huge late-inning rally.

Phil Hughes had a game of extremes. He was dominant in some ways (striking out a career-high nine - as Ken Singleton put it, eight of the 'swinging variety'), but made some big mistakes as well (two home-runs). He may very well be demoted to Scranton to make room for Chien Ming-Wang. What may have saved his day was the strike-'em-out-throw-'em-out double-play in the third: with two runners on, Hughes dropped a beautiful curve in there for strike three, and Roberts was caught in a pickle between first and second.

I'm starting to think (or perhaps hope) that Melky really has turned a corner, and that this isn't just a hot streak. Most players that have as many ABs as he does at his age (1550 at 23) turn out to be at least good MLers, if not great. 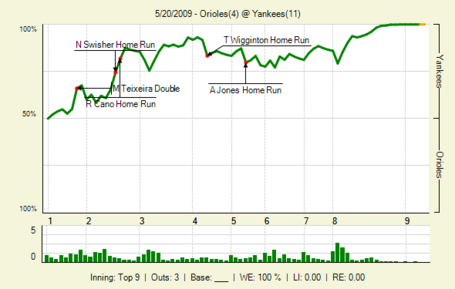