Sabathia (and the Yanks) are rolling

Share All sharing options for: Sabathia (and the Yanks) are rolling

Seven innings, one run, and the seventh straight win. It's all clicking for the Yankees right now.

CC Sabathia allowed a run in the first on two hits, and then proceeded to dominate the Orioles for the remainder of his outing, and was only pulled after the Yanks had built a comfortable lead. Overall, he struck out seven, and just four hitters reached base: three on hits, one via a walk. He threw a fantastic 69 of 105 pitches for strikes.

As we expected, Sabathia is finding his groove after a rocky start - in his last three games, he's allowed just three runs in 24 innings (1.13 ERA) with 20 Ks, six walks, and 12 hits. 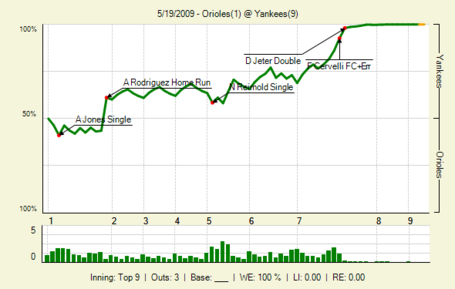 A-Rod quickly helped the Yankees rebound after the early deficit, hitting the longest home-run in the short history of the new Yankee Stadium to give the Bombers a 2-1 lead.

It was a close contest until the 7th, when a couple walks, an error, and some key hits increased the Yankee lead to 9-1.

Brian Bruney returned from the DL (in place of the demoted Edwar Ramirez, who still has options) to pitch a perfect inning with a K (topping out at 96 MPH).