Gardner and Matsui are the difference

Share All sharing options for: Gardner and Matsui are the difference

Game one was a relatively easy win for Toronto. Game two was easy for the Yanks. Tonight's game was a nailbiter that was decided potentially on one play. I'm writing of Brett Gardner's rocket to gun down Rod Barajas at homeplate that kept the Yankees within one. If not for that throw, the Jays go up 3-1 and have two runners on base.

Not to be outdone is Hideki Matsui, who homered off lefty specialist Jesse Carlson in the 7th that gave the Yanks a lead they wouldn't relinquish.

For all the crap Girardi's taken for leaving starters in too long (can you blame him with the way the bullpen's performed?), he should be given credit for it tonight. He let Sabathia pitch out of a bases-loaded jam in the 7th, then surprisingly came out for the 8th, despite having a lead. He pitched a scoreless inning, followed by Rivera in the 9th.

Every Yankee hitter reached base save for A-Rod, who went 0-5. He's hitting just .143 since returning from hip surgery.

It was nice to watch Kevin Millar go 0-7 in the series. Also nice to watch three solid, if unspectacular starts by Yankee pitchers. 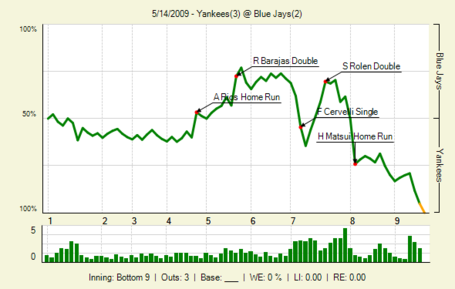