Bottom of the lineup comes through

Share All sharing options for: Bottom of the lineup comes through

It looked like the bottom of the lineup would be a weakness tonight, but it actually boosted the team's production.

Melky Cabrera, Brett Gardner, Ramiro Pena and Frankie Cervelli combined to go 5-16 with a HR, a triple, two doubles and walk. The homer was Gardner's first in the Bigs, as was Pena's triple. The team went a robust 6-13 with RISP.

Andy Pettitte pitched well enough, getting outs when he needed to, lowering his ERA to exactly 4.00 due to six innings of one (earned run) ball.

Nick Swisher was 0-5, lowering his batting average to .252. That's probably where it's going to end up, but it will obviously come with a fair amount of walks and homers.

Teixeira had two hits and may finally be coming out of his normal early-season slump. 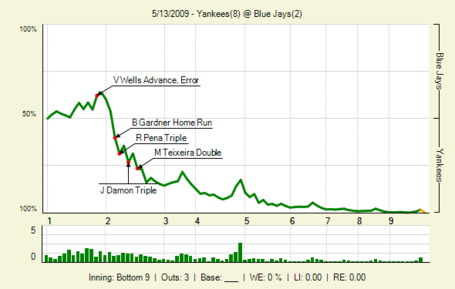