Melky! (though the real heroes are the relievers)

Share All sharing options for: Melky! (though the real heroes are the relievers)

On a day when Girardi and the offense did everything they could to lose, the bullpen came through huge. All told, our relievers pitched 7.2 innings of scoreless baseball, holding Oakland down long enough for the Yanks to finally push across a run.

Girardi left Sabathia in way too long, allowing Oakland to score two in the 7th that tied the game. He should've been pulled after allowing the first two hitters to reach, but instead was left in and promptly served up a couple singles.

The hitters had multiple opportunities to win the game (including bases loaded with no outs), but couldn't quite get that eighth run until Melky stepped to the plate in the 14th, five hours after the first pitch.

Special praise should go to Jose Veras, who had pitched terribly before today; he shut out Oakland for 3.1 ip (striking out four with no hits), while the other relievers only went one or less.

- Nick Swisher, despite being in the midst of slight hitting slump (.160 BA in his last seven games), is still helping the team because of his patience: he's drawn six walks and has a .344 OBP in the very same seven game 'hitting slump.'

- An intriguing scenario would have occurred had the game continued a few more innings. The Yanks had one reliever left in the pen: recently promoted Steven Jackson. If they burned through him, would Girardi have gone to Chien Ming-Wang? 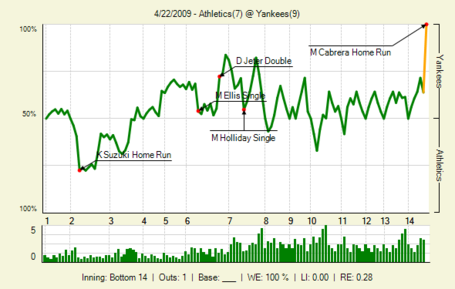