Andy Pettitte wasn't great: he allowed nine hits without a K, but the key was efficiency (105 pitches through seven), and the fact that he didn't walk anyone and held Oakland to 3-11 with RISP.

The turning point of the game probably occurred right off the bat; I'm referring to Brett Gardner's spectacular catch on a Jason Giambi line drive. If that fell in, the A's go up 1-0 with Giambi at second. Instead, Pettitte escaped the inning unscathed and led the Yanks to a 5-3 win.

Another turning point may also have involved Brett Gardner - his one out two-run single in the second came within inches of being caught by Mark Ellis. The Yankees won by that very margin.

Cody Ransom (ugh): he's not adjusting to being pitched outside, even though everyone knows how he's going to be pitched. On top of that, he had another misplay that nearly proved disastrous. 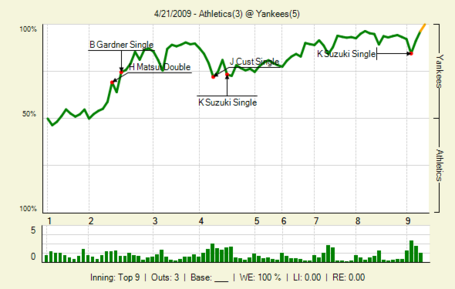