Share All sharing options for: Quick note on Scranton

If you haven't noticed, the Yanks' Triple-A team, the Scranton/Wilkes-Barre Yankees, have begun the season 11-0.

The team features such future stars as Phil Hughes and Mark Melancon.

Melancon is the most dominant reliever in our system: 9 ip, 3 h, 0 r, 2 bb, 15 k in the early going - all while getting two groundouts for every flyout (which is fantastic). It's only a matter of time before he becomes a permanent staple in the Bronx bullpen. 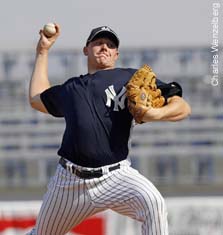