How long is the leash?

Share All sharing options for: How long is the leash?

It's not as if Chien Ming-Wang is pitching merely poorly; he's been atrocious through two games. Even a poor start like 5 ip, 5 er gives your team a chance to win, but 1 ip, 8 er (!) is a death blow. Dave Eiland has his work cut out for him.

How long will Wang be part of the rotation if he doesn't rebound? Does he get until the end of the month? Two more starts?

Speaking of a leash, how long will Cody Ransom play 3b? He finally got his second hit of the season, but also mis-played a pop-up, struck out and GIDP'ed.

- The last play of tonight's game was a microcosm: Carlos Pena made a great stab, saving an error for the third-baseman. Tampa played incredible defense, saving Kazmir at least a couple runs (Crawford stole two hits from Swisher, and Upton made a Mays-esque catch on Nady). The Yankees, on the other hand, muffed an infield pop-up and a short pop to left field.

- Nick Swisher is quickly becoming one of my favorite Yankees. That he would tip his cap to Carl Crawford and then happily take the ball to pitch an inning speaks to his over-flowing love of baseball. By the way, when was the last time an American Leaguer homered and struck out a batter in the same game? (It's a rhetorical question.) 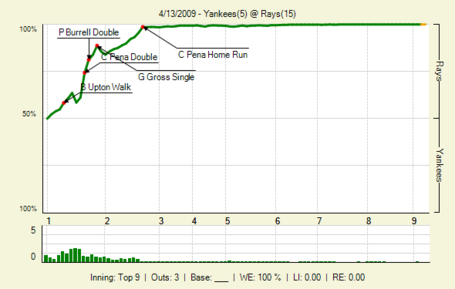 [as ugly a WPA graph as it gets]