Covering all the A-Rod angles

Share All sharing options for: Covering all the A-Rod angles 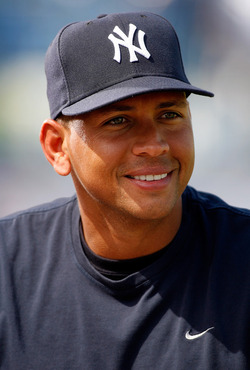 Look around the Inter-Google today and virtually every angle of the Alex Rodriguez hip injury has been touched upon.

I don't have a whole lot new to add, but I suppose we have to talk about it. So, let's just look around at what has already been written and said about latest chapter in the sorry A-Rod saga.

There is the A-Rod is always the center of the storm angle.

There is the can the Yankees win without him in 2009 angle.

Joel Sherman says several players have to step up, and stay healthy, to pick up the slack. Ian O'Connor tries to make the case that the Yankees might be better off if Rodriguez is out for an extended portion of the season.

There is the Brian Cashman is an idiot angle.

This comes about because of the revelation that A-Rod first admitted to trouble with his hip last season, but that the organization didn't deal with it until now. The blogosphere at large is having fun with this one. River Avenue Blues, iYankees and Was Watching are among those killing the Yankee GM.

There is the only nine more years of this crap angle.

As in only nine more years of this soap opera with a guy who is a huge distraction and whose health is obviously already deteriorating. Joel Sherman says Cashman has to deal with this mess, but it wasn't his idea. Sam Borden also says the Yankees should have let A-Rod go when they had the chance. AOL Fanhouse points the finger at Hank Steinbrenner. Finally, Wallace Matthews says Rodriguez is going to wind up costing the Yankees a lot more than $275 million.

There is the who plays third base if A-Rod is out angle.

Anyone and everyone seems to be weighing in on this topic. Right now, Cody Ransom would probably get the first crack at the job. NJ.com offers one list of possible replacements. Peter Abraham tossed out a bunch of names. Pinstripe Bible also offers a few ideas. YankeesRedSox.com suggests the Yankees make a last-minute pitch to Nomar Garciaparra. Joel Sherman also tosses in a few names.

Here's my $.02. Cashman should have been pursuing Nomar all along. He is inexpensive at this point, and even before A-Rod's injury was revealed Garciaparra was a perfect fit for the Yankee bench. He can play all four infield positions, and is obviously a better hitter than Ransom.

If it is too late to get Nomar, I would put Brandon Inge at the top of the list of players Cashman should inquire about. I know Inge can't hit much anymore (.236, .205 the past two seasons). What he can do is play third base, catch and play center field -- and do an excellent job defensively at all three spots. Coincidentally, those are the three biggest trouble spots for the Yankees in their every day lineup. Inge would provide tremendous versatility and protection.