Who planned this Stadium, anyway?

Share All sharing options for: Who planned this Stadium, anyway? 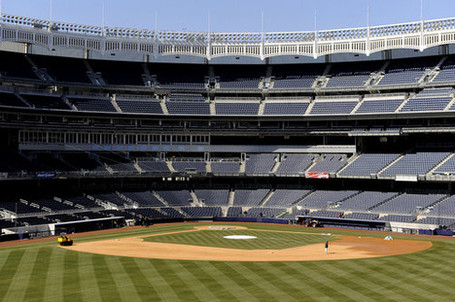 The new Yankee Stadium hasn't even hosted a single pitch, and yet the complaints are rolling in.

The latest is the rather startling revelation from Peter Abraham that the Stadium is "not particularly conducive to television cameras.

In this day and age, how can that be? Especially when the Yankees own their television network. That's just poor planning.

We also have the news that it will cost you $19 to park your car. That's another reason why the only time I will ever make the 3-hour ride from upstate New York is via a very occasional bus trip.

Then there is the fact that unless you have Field Level seats you can no longer wander down to that level and watch batting practice. Apparently, the folks at the Field Level are too important to share space with the rest of us for a little while.

On top of that, we know all about the fact that there are obstructed-view seats down in center field thanks to the high-class restaurant, and also a few down the foul lines.

Oh, and I am still annoyed that a team that has proudly trumpeted its 4 million plus attendance the past few seasons chose to screw fans by building a Stadium with 6,000 fewer seats in it than its predecessor.

The new Yankee Stadium is, seemingly a beautiful place. The way things are now, though, it will likely be quite a while before I see it for myself.