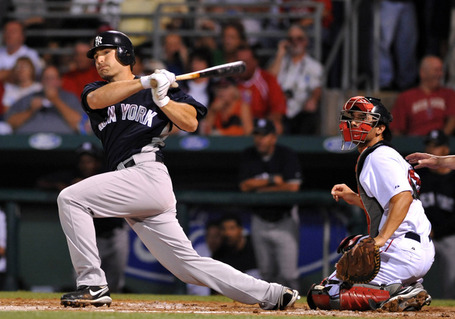 So, Xavier Nady is apparently going to start the season as the New York Yankees' right fielder.

That means, of course, that newly-acquired Nick Swisher will be in a reserve role. It also means that the Sabermetricians, who love Swisher's game, are up in arms today.

Fact is, there are plenty of good arguments for going either way on this move. Was Watching points out that Nady is just as good in clutch situations, if not better than Swisher.

Nady is a quality power bat, coming off the best two seasons of his career at age 29. He posted the highest batting average, home run total and slugging percentage of his career in 2008. He might not be an all-star, but he is a productive, hard-nosed player.

No matter who starts, there will be plenty of at-bats for both players. And they both know it.

"Swisher's obviously going to be a big part of this team, contributing a lot," Nady said. "I think we're going to need everybody."

"I try to look at all the positives. What's positive is that I'm versatile and I can play a lot of different positions

They wouldn't have brought me over here to sit on the bench."

From my vantage point, Swisher coming off the bench gives the Yankees a great weapon they have not had the past few seasons. There will be plenty of opportunities for Swisher to make an impact.

He's a switch hitter who can come into key spots late and hit for Cody Ransom. Or, he could hit for Brett Gardner or Melky Cabrera, whichever is in center field. He could even slide into center for an inning or two if the Yankees are behind.

He is a better defender than Nady, so maybe Joe Girardi will use him as a defensive replacement. If you subscribe to the belief that the best three defensive outfielders the Yankees have are Gardner, Cabrera and Swisher -- which I do -- why not finish games in which you are ahead with those three players on the field?

Bottom line is this. Whether or not he is technically a starter, Swisher is going to have a big impact on this team.