Share All sharing options for: Anatomy of an at-bat: Hideki's two-run homer

Hideki Matsui's two-run shot off Pedro Martinez in the second set the tone for the game and increased the Yankees' chances of winning 16% (the most in the game). It made the game 2-0, and was the key hit in his World Series MVP credentials. 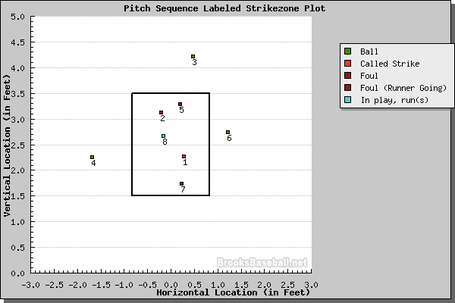 (McCarver says Matsui doesn't need to look for a curveball because he hit one for a homer in Game 2. A rare piece of solid analysis from McCarver, as Matsui doesn't see a non-FB all AB.)

#8: FB, down the middle, sayonara baseball!

Pedro does not have a 95 MPH fastball anymore, yet he pitched Matsui like he did. That was a big mistake. Of the eight pitches, at least five were four-seam fastballs. Pedro can top out about 90-91 nowadays. He threw an 89 MPH fastball right down the middle (the most hittable pitch of the AB), and Hideki didn't miss it.

The fact that A-Rod walked (Pedro clearly didn't want to throw him strikes) was important, because it meant Pedro didn't want to walk Matsui also. As bad as Posada was hitting, two runners on with no outs is a recipe for disaster. So Pedro threw a 3-2 pitch he knew would be a strike... and Hideki crushed it.

If it's his last game as a Yankee, what a way to go out!