Share All sharing options for: Anatomy of an at-bat: Johnny Damon's single

Damon gets the AAB Award for the second straight night. His nine-pitch single with two outs in the ninth started a three-run rally that allowed Mo to close out the game.

Why did it happen? Well, for starters, Damon is hot. After looking lost through the Yanks first 11 postseason games (.220/.250/.360), he now has four hits in his last nine ABs (including three XBHs).

Anyway, Damon had an epic battle with Lidge in the top of the ninth. Here's the sequence: 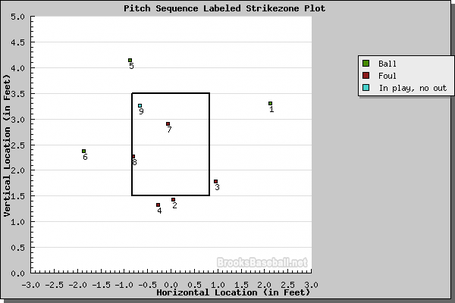 On the postgame show, Damon said something surprising: he was actually looking for the slider (because they made him 'look silly'), and reacted to the fastball. That's the opposite of the typical hitting coach advice to look for fastballs and adjust to everything else.

Damon fouled off five pitches, showing the same peskiness that used to infuriate us when he played for Boston. The key was getting to three balls. Once it got there, Lidge threw nothing but fastballs. Damon eventually got one that was up and hittable, and he stroked it into left-field.

After that, of course, he stole second on the first pitch to Teixeira and advanced to third on the throw (because no one was covering with the shift on). That, more than the single, seemed to unnerve Lidge, who hit Tex with a fastball, then gave up a double to A-Rod and a single to Posada.