Share All sharing options for: Anatomy of an at-bat: Johnny Damon's two-run double

From here on out, I'm going to dissect one plate appearance from each game and try to figure out exactly why and how it happened. The subject will be the PA with the highest WPA (Win Probability Added), meaning the most influential on the outcome of the game.

In Game 3, it was Johnny Damon's two-run double in the top of the fifth that put the Yanks ahead, 5-3. It increased the Yankees chances of winning 21.4%. Let's look at his three PA - 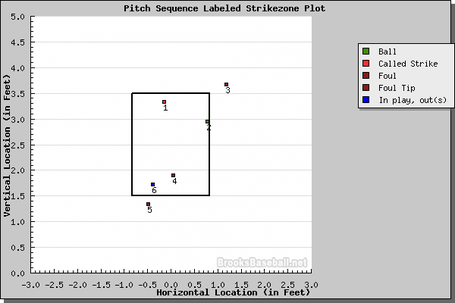 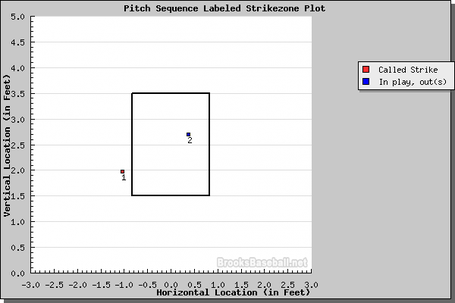 Cole Hamels started him with a changeup this time, then went back to the fastball and jammed him. 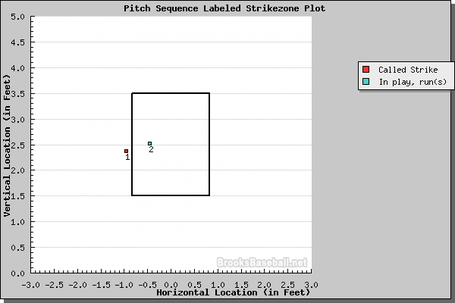 So two more fastballs. Of the 10 pitches Damon saw from Hamels, eight were fastballs, two were changeups - what that means is he didn't throw one curveball. Very strange, considering Hamels has the platoon advantage and a curve would tail away from Damon.

Despite Hamels getting ahead of Damon, 0-1, he threw another fastball, trying to hit the same location - the key was that he missed by a few inches, so instead of a fastball just off the corner, it was in a fairly hittable part of the strikezone. And Damon, having already seen seven fastballs, was ready for this one, lining it to right-center to drive in two.

What's very interesting is that Hamels did seem to establish the inside part of the plate to Damon. In his first two ABs, three of the eight pitches were inside (including jamming him in his second PA) - enough to make Damon at least consider the inner part of the plate. So why was Damon so ready for an outside fastball? Probably because Hamels was getting hit around in the fifth, and was pitching with two runners on. He didn't want to risk a HBP (to load the bases for Tex) or a three-run homer with an inside pitch, so he decided to stay away, and it cost him.