Molina vs. Posada, round two

Share All sharing options for: Molina vs. Posada, round two

An(other) attempt to settle the Burnett/Molina/Posada soap opera follows. I wanted to calculate and assign a run value to Molina's catching and compare it to Posada's batting.

(This whole article assumes Burnett's superior pitching to Molina is real and not just chance. Tom Tango, who is on par with Bill James as far as SABRmetricians go, says there's something to it.)

A.J. Burnett's OPS Against this year with -

Since starters rarely pitch complete games, I had to figure out what percentage of the full game Burnett usually threw.

Holding hitters to the lower OPS of .650 (Burnett's OPS Against with Molina catching) - which means about four runs/game, I multiplied four runs by .7 (70%), which equals 2.8.

2.8 is the number of runs Burnett should average in a normal start with Molina catching (only counting the opponent's hitting, not their baserunning).

That is a difference of .7 runs/game in favor of Jose Molina.

Now to their hitting

The good news is that Molina will only get 2-3 PA in game 2. As soon as Burnett is out, Posada will replace him in the lineup. So considering Molina will hit ninth, and he'll only go as long as Burnett (about 6-7 innings), he'll have a minimal offensive impact on the game.

Going back to the OPS Run graph, we know that a .100 difference in OPS is equal to about 235 runs/season (for a whole team). Since we're comparing individual players, the calculations must continue.

If Molina gets 2 PA instead of Posada, it costs the Yankees .26 runs (3 PA costs them .39 runs), so the .7 runs better Burnett is with Molina more than offsets his lower offensive production. In fact, it would appear to give the Yankees anywhere from a .31 to a .44 run advantage. So the Yankees are about a third to a half a run better with Molina catching Burnett than Posada (if Molina only gets 2-3 PA in the game). Molina would have to get more than five PA (.7 divided by .13) for him to become less valuable than Posada. And all this doesn't even account for Molina's superior defense, both at blocking pitches in the dirt and at throwing out baserunners, which I'll try to quantify now:

Posada had 7 errors. Molina had the equivalent of 2.2. Posada had 8 passed balls. Molina had 6.6. Posada had 41 wild pitches. Molina had 33. Both had the same caught stealing rate of 28%. And since it's nearly impossible to quantify the 'intimidation factor' of Molina's better arm (that prevents attempted steals), I won't account for that aspect.

So anyway, per 9 innings:

Therefore, Posada allowed .78 'extra bases'/game more than Molina. How much is that worth in runs?

In other words, Molina's defense is worth +.13 runs/game, his 'Burnett game-calling' is worth +.7 runs/game, but his batting is worth negative .13 runs/PA (all relative to Posada).

So Molina's catching/defense is worth almost a full run more than Posada, but every PA he gets drops his value (though it would take more than six to make Posada the better choice): 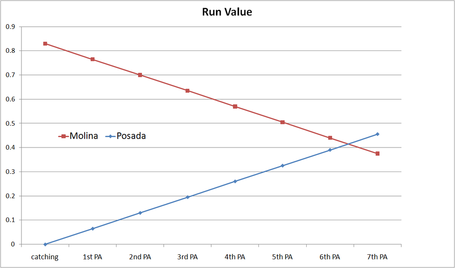 (But again, we must remember this all assumes Burnett's superior pitching with Molina is real and more than just chance.)