Joe G. took some of the fire out of this as word has leaked out that Molina will catch AJ Burnett at least during the first round.

To me, it's not a rational debate.  My great fault is that I want to engage all people rationally, even the irrational.

Jorge will record an out 64% of the time.  Jose will record an out 71% of the time.  When Jorge reaches base, he averages 2.09 bases; Jose averages 1.07.  Assuming that the catchers will get their ABs with one out and none on (when their damage to the Yankees' ability to score is minimized), we can figure out the value of the average Posada hit (about half a run) vs. the average Molina run (about a quarter run).

And my math teacher told me she didn't think I could pass the Regents exam (true story). 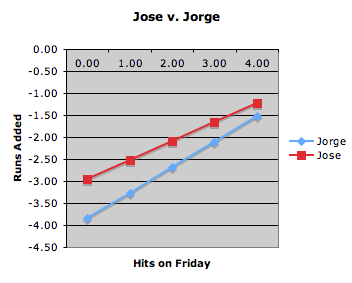 So, if the numbers are believable, then Jorge would need to reach base twice to outperform Jose's (nearly inevitable) 0-fer.

The stats are skewed by Posada catching AJ in his disasters at Fenway.  I am repulsed by the idea of grading a catcher worthy or unworthy based on the pitcher's performance rather than his own.

Furthermore, I submit for your anecdotal approval that the Yankees' worst stretch of offensive performance coincided with the loss of Posada's patience in the back of the lineup.

I would never let Molina start in the postseason.  But Joe G. is following the logic that correlation indicates causation: AJ has performed better while Jose was behind the dish; therefore, the Jose-AJ battery must be better than the Jorge-AJ battery.

All we can do is hope that Friday's performance follows the season average.