Share All sharing options for: Yankees take game one, 7-2

Funny how CC Sabathia can't 'get it done' in the playoffs... until he does. It reminds me of Barry Bonds in 2002. Before that postseason, he was a playoff choker who couldn't deliver when it really mattered. Then in the Giants run that year, he hit .356/.581/.978.

Sabathia gave up just one run in 6.2 innings tonight, striking out eight with no walks.

Though the Twins had more hits (10 to 9), they lacked the power of the Yankees, who had a double and two homers compared to just two doubles (and eight singles) for Minnesota.

Yankee Stadium got awfully quiet after Minnesota took a 2-0 lead. Then The Captain stepped to the plate and launched Brian Duensing's hanging slider for a two-run homer. Jeter had a perfect night: 2-2, 2 BB.

A-Rod looked lost through two AB, then decided to get aggressive and swung at the first pitch he saw in his next AB, knocking in the Yanks fourth run. It was his first hit in 29 postseason AB with runners on. Kate Hudson and Jay-Z were ecstatic. He then lined a long single to rightfield for the Yanks seventh run.

Hideki Matsui continues his domination of southpaws - he took Francisco Liriano deep for a two-run shot in the fifth.

Joe Girardi should get credit for twice starting the runner at first base, for the batters hit certain DPs each time, only for the runner to already be at second.

Despite reading a lot of complaints about TBS' broadcasting tandem, I didn't think they were so bad. Ron Darling is downright listenable, while Chip Caray is merely vanilla: neither good nor bad. I also love the 'PitchTrax' graphic on the edge of the screen, telling us really whether a pitch is a strike or a ball.

What we haven't really mentioned yet is the playoff roster, which features two surprises: Frankie Cervelli and Chad Gaudin. A third catcher and a second long-reliever? I don't understand it, and am surprised Girardi didn't feel someone like Freddy Guzman or Ramiro Pena would be more helpful. 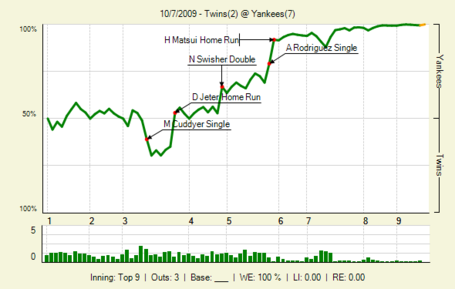