The poor call that shouldn't have mattered

Share All sharing options for: The poor call that shouldn't have mattered

Since the double play was turned anyway, Shane Victorino's take-out slide in the eighth inning will likely be forgotten as the years pass. So before that happens, I want to show that he should've been called out regardless of whether Chase Utley was safe at first.

There are several rules on the matter:

7.09 (d) Any... runner who has just been put out hinders or impedes any following play being made on a runner. Such runner shall be declared out for the interference of his teammate;

7.09 (e) If... a base runner willfully and deliberately interferes with... a fielder in the act of fielding a batted ball with the obvious intent to break up a double play, the ball is dead. The umpire shall call the runner out for interference and also call out the batter-runner because of the action of his teammate.

Victorino broke all three. Here's the video: look how Victorino rolled into Jeter's legs. It's one thing to slide into the fielder or throw your arms out toward him, but to roll into his legs? That is wrong, both legally and morally. If y'all remember, Victorino got into some hot water for interfering on a run-down in the NLCS. The umpires need to call the runner out more often on those wild take-out slides or someone is going to get seriously hurt.

A couple photos to drive home the point: 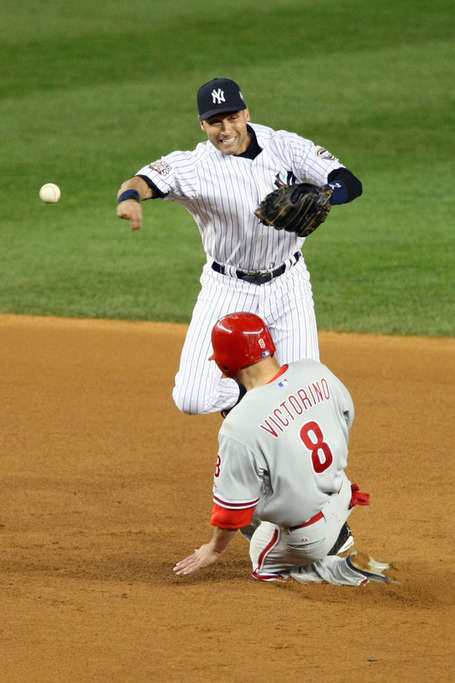 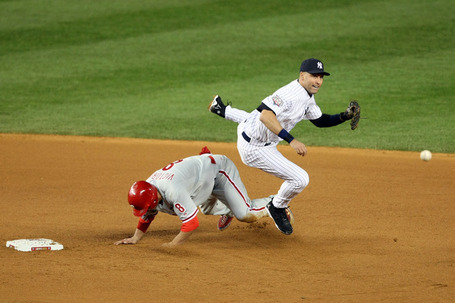 Was it dirty? You decide.