Anatomy of an at-bat

Share All sharing options for: Anatomy of an at-bat

We will hopefully look back at Mark Teixeira's fourth inning solo homer as the turning point of the World Series. Up to that point, the Yankees had scored one run in 12 innings, and it looked like their lineup would be dominated for a second straight night.

Then Tex stepped to the plate and drilled a 1-0 changeup (as if he was looking for it) into the rightfield bullpen to tie the game. Let's look back and see how it came to be.

First off, Pedro fell in love with his changeup. He threw it (44 times) more than any other pitch (fastball 34, curveball 13, slider 11, cutter 5), including five of his first six pitches. Tex obviously knew how attached Pedro was to his changeup, so that was one reason to look for it. Now let's look at his first AB - 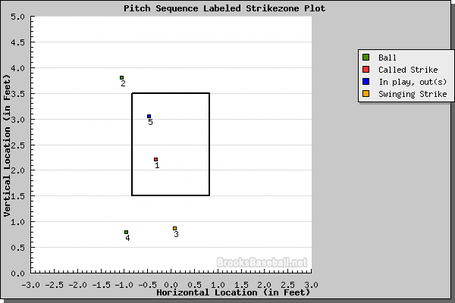 #3: curve, swinging strike, in the dirt, middle of the plate

So he started Tex with a changeup for a called strike, yet retired him on a 91 MPH fastball, all the while staying away from him... 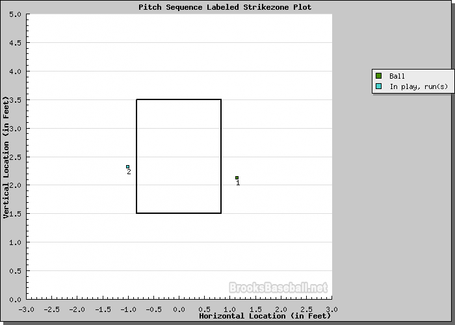 The key here is that Pedro fell behind. On 1-0, Tex could take an all-or-nothing swing: all means a homer, nothing mean a strike (no big deal). Pedro tried to establish the inside part of the plate but missed. Most batters look for a fastball on 1-0, but Pedro was smart enough (though in this case he was too smart) to not throw a fastball there, but to throw something that looked like a fastball (in other words, a changeup). Tex realized that, and combined with Pedro's changeup obsession (he'd thrown 24 to that point, by my count), being ahead in the count, and the fact that he'd stayed away from him his entire first AB and missed with his only inside pitch, it was a perfect time to guess outside changeup: that's what Tex did and he got the biggest hit of the World Series so far.

(You could make a valid argument that Hideki Matsui's homer was bigger (and it was according to WPA), but I contend Tex's was more important, for the Yankee offense had looked inept to that point, and it kind of 'broke the ice' and allowed the batters to relax.)