I guess it makes sense...

See ya in the Bronx, kids.

Do the gory details need to be relived?

I can't decide whether I'm relieved or aggravated that I didn't decide to take tomorrow off.

Is this what the Twins felt like?? Good God. I have a newfound respect for every team that's suffered a Yankee comeback/walkoff.

This isn't exactly our wheelhouse. The Yankees make a comeback, they're making a comeback to win the game. They don't mess around. (With a few exceptions, some of which are still fresh in my mind.)

I headed up to my standard game-watching haunt, with the Yankees already in a 4-0 hole in the 1st.

When I arrived at the bar, the score hadn't changed. My sister met me outside.

"It was like the police coming to a high school party where someone drank themself unconscious."

"What the HELL are you talking about?"

"When you said you were on your way here. I told everyone, 'she's coming, she's gonna be here in minutes.' And they just got ashen. So it was like, what's worse: the fact someone's in critical condition, like the Yankees? Or the fact the scary/aggressive/OCD/unpredictable time-bomb of a cop is on his way. And you don't know if he's in a good mood and is just gonna be like, 'eh, kids'll be kids. I'll give 'em a warning or something. OR, if you're gonna get the psycho-crazed lit fuse of a cop."

And if I needed it further spelled out for me, she added: "People think you're nuts."

(I'm just gonna copy and paste that direct quote next time my mom asks me why I'm single.)

And that's how my night went. Unfortunately for all game-viewers within striking distance of me, they weren't just getting "Bad AJ," but they were also getting "Bad CYC."

To be fair, A.J. Burnett didn't let up much else after those 4 runs in the first. He got his requisite One Bad Inning out of the way in the first. So, don't put this all on AJ. The Yankees rallied from this deficit, as the Yankees are wont to do.

Girardi's managerial decisions will be the spotlighted subplot of this loss. And for once, I'm not jumping on this congo line of Joe-Hate.

Should he have pulled AJ earlier? Maybe. But how could he have known that? AJ had thrown 89 pitches at the time. He had been dealing for 5 innings. Girardi has him start the bottom of the 7th, and all of a sudden we got the Grady Little comparisons pouring out like a dirty-stayout's vomit on prom night.

(Maybe I wouldn't have opted for Damaso Marte as his replacement, per se. But that's beside the point.)

Phil Hughes comes in after Marte, and can anyone question this move? Phil Hughes was our gas-man. He spent the season striking out the side. How could Joe have known this decision was going to be our hamatia?

We're throwing Joe under the bus for games 3 and 5, but I think Thing 1 and Thing 2 have knocked off the damned-if-you-do-damned-if-you-don't stigma that's been clinging to A-Rod like a piece of heavily charged cellpohane, and transferred it directly to Girardi.

In game 3, he yanked David Robertson with 2 outs and no one on in favor of Alfredo Aceves, and I don't think even the biggest Girardi apologist can justify this move. And I suspect the rampant backlash he received after that game may have engendered the decision to push AJ for another couple of batters before pulling him.

I certainly haven't been the guy's biggest advocate this year, but at this point, I'm ready to say, We're the farthest we've been since 2003. We're considered the team to beat, the best in the league. You don't do that in spite of your manager.

No, I think this game was just lost, pure and simple. The line scores for each club are nearly identical across the boards, among pitchers and batters. There were missed opportunities to score, shaky outings from the starters, blown holds by the pen, and--of course--the sprinkling of unassailably shoddy officiating.

The Yankees managed to come back from 4-0 and take a  6-4 lead, but the Angels matched our 6-run 7th, with their own 3-run bottom half. Nick Swisher, with bases loaded and 2 outs, popped up to end the game, and he is now the only person on the Yankees who hasn't made a meaningful contribution in the postseason. All he had to do was get on base, and the game's tied. Talk about a stomach punch.
​
Speaking of things that make me sick, John Lackey, prior to all this, had an outburst that I think may give me nightmares in weeks to come. When The Most Brilliant Manager Ever in the History of Life trotted to the mound for a little chat with his starter, Lackey has a veritable shit fit and clearly barks, "This one's mine."

And 6 hours later, I'm still trying to shake the image of his psychotic expression out from my mind. 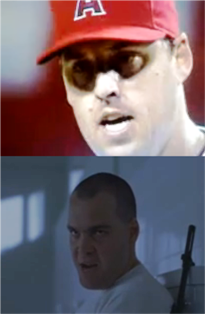 Back to the Bronx on Saturday, which gives the sports world almost 2 days to get in some solid practice hours for the "How Many References to 2004 Can We Shoehorn Into the ALCS Coverage?" Tournament.

I'm not worried. They're the Yankees. They'll make it.