A seesaw game where the lead changed hands five times. The Yankees had a 3-0 lead until Anaheim rallied for three runs (mostly due to a Vlad Guerrero two-run HR), tying the game in the sixth. They then went ahead, 4-3, before Jorge Posada lined a 'just enough' homer over the centerfield wall.

Now to the rant: WTF was Girardi thinking taking out David Robertson in favor of Alfredo Aceves? Robertson had just recorded two outs, no one was on base, so why, Joe? Kendrick had gone 1-2 against DR. Not really enough to make a judgment either way. Aceves had never faced Kendrick, so Girardi was apparently banking on the unfamiliarity playing an integral part. That was not to be: Kendrick singled and Jeff Mathis doubled him home. Neither were lucky hits; both were hit right on the nose. No one to blame but Aceves and Girardi.

Robertson has been much better: a flawless ERA (in 3 ip), with two hits, two walks and one K. But that doesn't even do them justice: DR has just looked so much better, hitting his spots, throwing strikes - whereas Aceves is falling behind and his pitches don't have any bite.

Anyway, that fifth run is very important. Scoring four runs equates to about a .500 record. Getting that one extra run increases the chances of winning over .600! The Yanks just couldn't get that fifth run across, despite hitting four homers (because they were all solo shots).

But, we have to give some credit to Anaheim's bullpen, which had to start early due to one of Jered Weaver's worst games of the year. They held the Bombers to one run in six innings (3 hits, 4 walks).

Mariano was an absolute magician in the bottom of the tenth, escaping a runner on third, no out situation. Unfortunately, that will be forgotten to the annals of time because it was all for naught.

What else can be said about Mark Teixeira's defense? Not only did he make several more tough pick-ups at first, but he was actually at second to take the relay throw on Abreu's would-be double, caught Morales' sinking liner in the ninth, and made several great throws that we haven't seen since the days of Constantino.

Should Brett Gardner have tried to steal? I say yes. Posada is a prime GIDP candidate, and Gardner's success rate is over 80% - Jeff Mathis just happened to make a perfect throw. It's rare but it happens.

Would Posada still have homered if Gardner had stayed on first or was successful in his steal attempt? Should Girardi have left Pettitte in the game (Joba entered and gave up a triple and a sac-fly)? 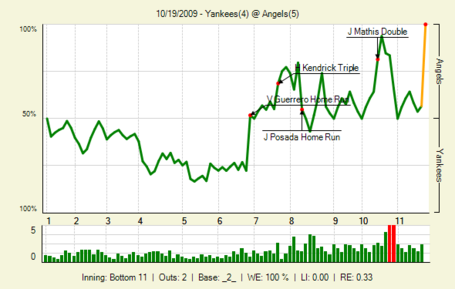 A lot of pressure on CC tomorrow. Not only will he be pitching on short rest, but every reliever but one was used today