Now we all know Mo is better than Paps, but you'd sometimes hear Boston fans praise Papelbon's spotless postseason ERA. After blowing up in yesterday's season-ending loss to Anaheim, his ERA jumped to 1.00, which is now higher than Rivera's miniscule .74 ERA.

Papelbon is still an excellent closer, but have we seen the last of him in a Boston uniform? He always says the wrong thing, will reach free agency in two years, has declined the past couple seasons, and a guy who seems at least as good (Daniel Bard) is waiting in the wings.

I didn't want to take away from the series-clinching win last night, so today seems apropos to rub it into those (formerly) trash-talking Red Sox fans (I'm thinking mainly of my cousin).

What a lovely WPA graph: 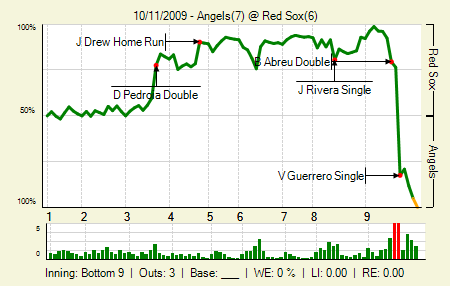