Controversial thoughts on a nostalgic building

Share All sharing options for: Controversial thoughts on a nostalgic building 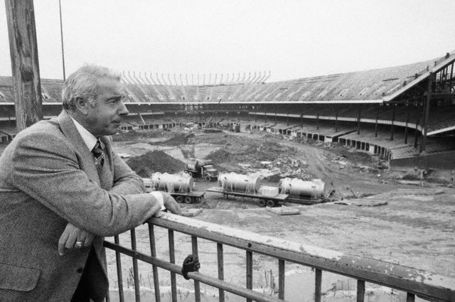 The following is a (slightly modified) article I wrote for River Ave. Blues on July 20th, 2008 (reprinted with permission):

Remember when you used to love going to Yankee games? For me, although I certainly did, it’s hard to even recall why.

Let me explain… no, there is too much. Let me sum up. My father’s company (that he co-manages) was able to acquire box-seat season tickets when the Yanks were at their worst, 1989 ("It’s a whole new ballgame" was the motto that year; I still have a bumper sticker with it.) I went to at least 10 games each year through the 90’s — saw the Jeff Maier home run in ‘96, Tino’s Game 1 grand slam in ‘98, Clemens spraying the fans with champagne in ‘99, and throwing a bat at Mike Piazza the following year. Each season though, my access to tickets waned as demand among my father’s clients increased. My father and his business partner sold all the playoff tickets in 2001 for several reasons: they were bordering on unaffordable, the offers/requests from buyers/clients were too strong to turn down, and they (and I admittedly) thought they’d be in the World Series about every year.

So I guess you could say we were part of the problem — the reason the attending fan base started to change to more corporate/casual-fan types (e.g. the ‘glitterati’ — you know, people who glitter). We definitely deserve some of the blame, but other reasons for that change include the success of the team, the ensuing demand for tickets, and the freedom that gave the Yankees to raise prices astronomically.

There used to be knowledgeable, passionate fans in attendance, but a side effect of the team’s success is that those fans were forced out by demand. In fact, my wife and I prefer sitting in the $18 upper deck seats where the fans are actually passionate about the game.

Does anyone, anyone, still do the YMCA? I pity the grounds crew that must endure that contrived garbage (aimed purely at casual fans) on a nightly basis. Then there’s the relentless audio bombardment that doesn’t let up until "New York, New York" has played several times. And what ever happened to organic chants, cheers and general fan enthusiasm? On countless occasions have I witnessed organic chants snuffed out by the PA system blaring some canned chant or music that we’ve heard a thousand times before.

There’s just a lack of understanding of what the fans want, like the refusal to show video replays (of close plays) on the jumbo-tron. I know they don’t want to 'show up' the umpires, but they do it all the time in the NFL, why not in MLB? I had no idea Jeff Maier had even reached over the wall until I got home that night to see the replay. That brings me to my next point: while all the cons of attending a game have increased over the years, the pros of watching from home have also increased. The advent of HD, surround sound, the YES Network and DVR have combined to make the home-viewing experience better than being there. And where would you rather sit, on a plastic folding chair or on your living room couch?

Then there’s the food situation. I can order in a large pizza for the price of about three disgusting slices at the Stadium. $9 for shit beer? No thanks. I’ll take my favorite, Dogfish Head, which runs $9 for a six-pack. At my only game in 2008, the trio in front of me ordered food and drinks through the waiter service. It took almost two hours to get something akin to two beers, a soda, chicken fingers, a hot dog, and a sandwich (for $71 plus tip). It’s basically fast-food quality, only slow. I learned my lesson long ago and now bring soda, water, sandwiches, peanuts and sunflower seeds to every game. It saves money and time (outside of tasting better). The vendors don’t even come down to the box-seats; to get food you have to order through the waiter (and wait the requisite hour plus), leave your seat to catch up to a vendor, or wait in line at the food court (and miss part of the game).

Transportation has become more difficult. Instead of spending an hour (each way) and $20+ getting to and from the Stadium, I can spend that time walking my dog, cooking dinner, watching the post-game show, watching another ballgame, etc. Parking is absolutely FUBAR around the Stadium, and I have a knack for being the first car locked out of the parking lot (it’s happened twice) – I was literally the very first car that cops started putting traffic cones in front of to block out of the garage. You might suggest taking the subway, which I did many times when I lived in Manhattan and Queens, but it’s hardly better than driving, only more cost efficient. The worst subway ride of my life followed a Yankee game: a hefty, teenage boy stood near me holding the ceiling rail on a hot summer day (you know what that means), and the stench emanating from him was unbelievable. It was hold your breath horrible, and there was no where to go as the train was completely packed. (The new train station will hopefully alleviate a lot of the congestion.)

On top of that, my wife and I have a talent for attending rained out/rain delayed games, which now kills us because we live in Philly (have since May of '07). I was upset to find out the new Stadium would not have a retractable roof. I know it would cost about $400 million, but they’re spending over $1.2 billion already, and the Stadium’s supposed to last more than 50 years, why not make the investment that would ensure a complete and on-time game every single day? Yet another reason we have and will be attending fewer games.

My father’s tickets, $250 a seat last year, will jump to the $500-$2500 range next year, and they’re not even being guaranteed the same seats in the new Stadium. He’s going to try to move back to 'affordable territory': back section of the field level or front section of the upper deck (we hope).

With all that being said, I’m certainly going to a game at the new Stadium, but more for the novelty, not to watch my beloved Yankees.

This might come off as whiny, but don’t get me wrong, I still enjoy attending games in person, just not as much as I used to - and the preceding was a summary of my problems as a cathartic exercise. I know 2008 was a season to celebrate the Stadium, but I for one will miss nothing but the history. As far as I’m concerned, the original Yankee Stadium was destroyed in 1973. 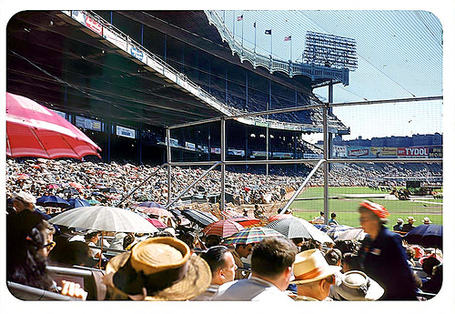 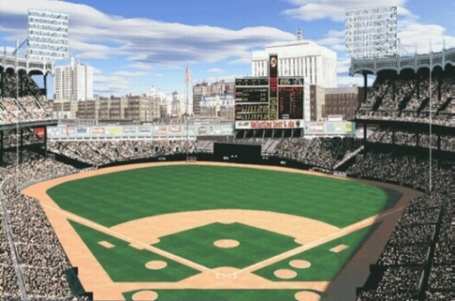 (This isn't the Stadium I know.)