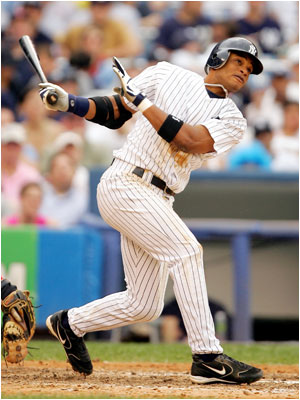 There are some that want him traded while some retain hope that he will blossom into a great hitter. I'm in the latter camp and here's why:

- His BABIP was uncharacteristically low (.286 vs. .323 career mark). Factoring that in with the line drive rate indicates that he was rather unlucky this season.

- He hit less grounders and more flyballs this year, which usually leads to greater power (though it has yet to show up).

- He still plays quality defense. While his Zone Rating was below average, his Range Factor and FRAA (Fielding Runs Above Average) were above.

- And perhaps the biggest factor of all: he'll be just 26 next season, still not in the (historically speaking) prime of his career.

So what (if anything) should be done about him?

PS: Mo decided to have shoulder surgery (which will occur on October 6th) rather than cortisone shots, and is expected to be ready for spring training.