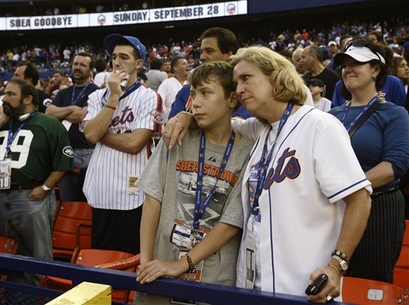 We could be Met fans. What a disastrous ending to their season and their stadium. In a way, it was better we were eliminated from the playoffs when we played the last Stadium game. We could celebrate and enjoy Yankee Stadium without the anxiety of worrying about the actual outcome of the game.

If you're unaware, the Mets came into the day tied with Milwaukee for the wildcard. The Brewers won behind a complete game from CC Sabathia (damn you Ned Yost and Dale Sveum), beating the Cubs 3-1. The Mets were tied with the Marlins through seven, but their atrocious bullpen allowed back-to-back homers and Florida took a 4-2 lead. The Mets had to win to stay alive but couldn't tack on any runs and missed the playoffs on the last day of the season for the second straight year.

On top of that, they 'celebrated' Shea Stadium following the game with festivities that paled to those at Yankee Stadium last week. 1) They tore off the game counter to reveal the CitiField logo, and Met fans, on top of the crushing loss, were given another reminder of the awful corporate name and logo that will adorn their new park; 2) the former Mets that attended dressed like they would for any other day, wearing slacks, jeans, various caps and sneakers, only with a Met jersey pulled down over it; 3) all the players were supposed to step on home plate before leaving - can you guess who the one guy who didn't was? Ole Yogi. But it could've been one of three things: he either didn't want to (unlikely), didn't understand the concept (possible), or tried to but missed (likely). Even when he's a Met, he's still a Yankee.