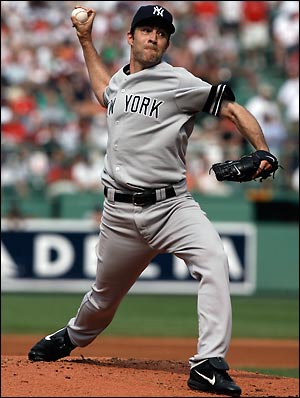 I was wrong about a lot of things this season:

But why dwell on the negatives?  (You know, I just spent last week telling my students never to use rhetorical questions in their essays.  Do as I say, not as I do).

I got one prediction right, and with frightening accuracy, if I do say so myself (and I do).

And the 20 game winner's final numbers?

Now, I suppose you could argue that the only number I got right was the 150Ks, and since Moose needed an extra twenty and a third innings to rack up those Ks, I really didn't get any of the numbers right.  But if you feel that way, you're probably also hoping that Moose hangs them up on a high note.

Frankly, I find myself hoping that, too- that Mussina doesn't follow the Tom Glavine trail of one season too many.  As I type this, Buster Olney is on Baseball Tonight saying Moose is likely finished because he doesn't think he can pitch the 3 more seasons he'd need to get the 30 wins to 300.  But I think Moose only a ring and/or another 15 wins separate Moose from certain enshrinement in Cooperstown; I don't see how he can pass on another season if he thinks the Yanks are contenders.