Share All sharing options for: Don't Mess with Tex 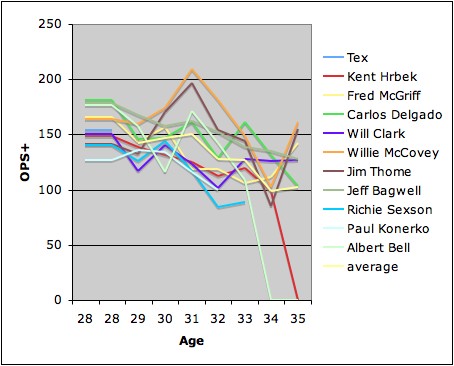 Oh, so much more after the jump! 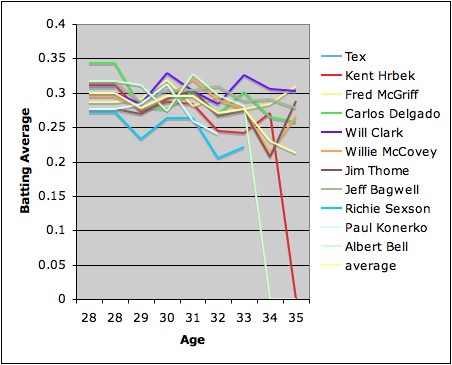 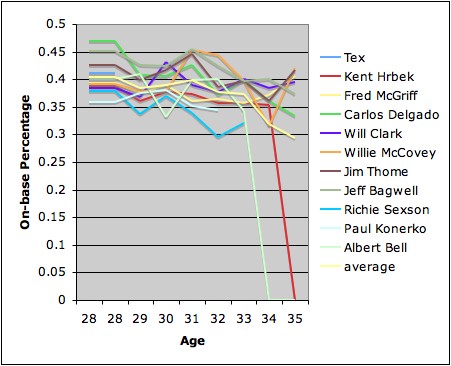 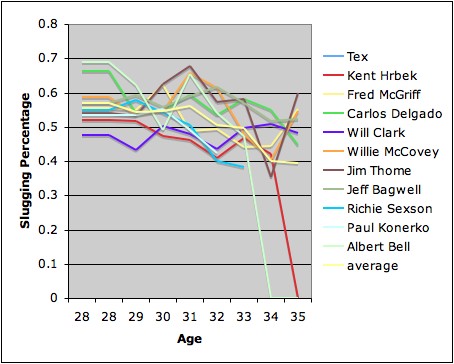 So first things first, I have to apologize to all you regular readers and to my fellow mods for my extended silence.  This being a grown-up, teaching high school, full
-time job, real life nonsense has been kicking my butt.  I'm getting a handle on it, and promise several posts per week going forward.

Now, the rumor mill is grinding away, suggesting all sorts of craziness, but I suspect Tex will be in line for a 6 or 7 year deal.  He hasn't been as good as Giambi was leading up to Jason's 2002 deal, but the market is richer and Tex plays better defense with fewer steroids (we assume).

Switch hitting first basemen are hard to come by, but even at his best (this season) Tex has only been marginally better than Giambi and the other elite 1B in the league.

And while Tex may be the best defensive 1B in the game today, a strong defensive first baseman isn't worth much.  Yankee fans know all too well that a player can win a Gold Glove for each day of the week, plus a couple extra to save for holidays and bar mitzvahs, and still not make the Hall.

Finally, the reason for all the pretty charts: first basemen don't hold up well.  Tex might be different.  He might hold up better than most, but 2 of his 10 comparables didn't play at age 35, and Sexson and Konerko are on their way towards bringing that to 40%.  And when I look at the average of the 10 players in OPS+ (which is adjusted for all time) things start to look dicey around age 31.  Tex will be 29 in April.

Those ten players played 63 seasons from ages 29-35 (not counting the seasons that Belle and Clark didn't play), those ten managed to play 150+ games on 25 times (in fairness, Will Clark played in 110 of 113 games in 1994- perhaps he was robbed of his only 150+ game season after turning 26 in 1990, but I wouldn't bet on it) (Jeff Bagwell had the healthiest run, making the grade 6 of 7 years while playing in 1109 of 1134 possible games; the Belle situation almost deserves its own paragraph because he played 775 of 781 games before the condition of his hip ended his career).

New Yankee Stadium might include a license to print money, but the Yankees are better off saving 1B for their aging veterans.  I'd re-sign Giambi to a one-year deal if he'll take it (he might if there's no multi-year deal from a contender, I have the feeling he still wants that ring).

But under no circumstances should we mess with Tex and the high-dollar + long-years demands he and Scott Boras are going to bring to the table.