Share All sharing options for: Clean shaven prizes in the new Stadium 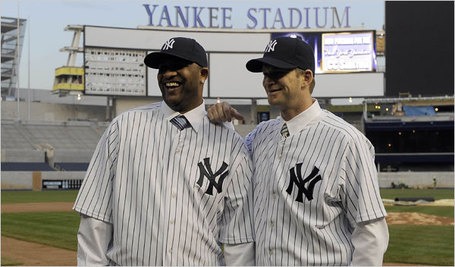 Sabathia threw the most pitches in the majors last season, and Burnett threw the most in the American League. They combined for 35 victories, and neither has yet celebrated his 32nd birthday. The Yankees rewarded Sabathia with a seven-year, $161 million deal – a record for a pitcher – while Burnett got five years and $82.5 million.

"I’m not going to say money wasn’t an issue," Burnett said. "I’m not going to lie; of course money had something to do with it. But I have a chance to win five years in a row. Whether you admit you love them or hate them, everybody wants to be a Yankee."

That includes Sabathia, the Vallejo, Calif., native who said the Yankees were among his three choices.

I didn't know that about Sabathia and Burnett leading each league in pitches.

And at least Burnett can admit its about the money.