Jints squeak one out over Birds

Share All sharing options for: Jints squeak one out over Birds

The Giants were clearly the better team. They had the ball almost 39 minutes, and gained one hundred more yards. The game was close (36-31) 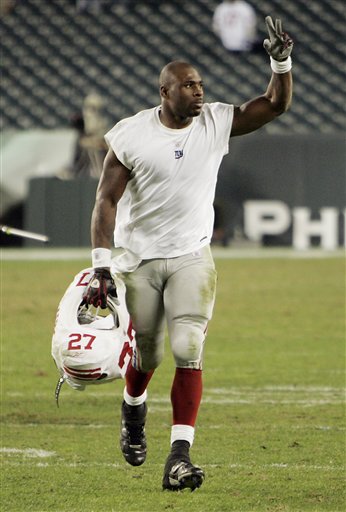 because the Giants' red zone offense struggled at times.

While the Jints' pass rush was less than stellar (0 sacks), it was the secondary that excelled tonight, holding Donovan McNabb to a lowly 47% completion percentage.

There must have been something in the game-planning that motivated the Giants to try to hurdle Philly defenders. Perhaps the Eagles go particularly low when tackling, because Jacobs, Boss and Ward all did it (with varying degrees of success).

The Giants are 8-1 and have at least a two game lead over every division rival. They're in the driver's seat.